Update: The proposal was passed by the UW Board of Regents on Oct. 9. Chancellor Blank has pledged to enroll 3,600 Wisconsin residents.

This week, the UW System and UW-Madison will bring a proposal to the Board of Regents to waive the enrollment cap on non-resident students, allowing a modest increase in their numbers, for the next four years while continuing to enroll at least 3,500 in-state high school grads in every freshman class.

I first started talking about this idea last spring and I am thankful that the board is considering it. It’s designed to address an acute problem facing Wisconsin businesses: a shortage of highly qualified employees.

This proposal is driven by the serious demographic challenges in the state of Wisconsin. The number of Wisconsin high school graduates peaked at 71,000 in 2009 and has been falling since. For 2015 there are projected to be only 64,100 high school graduates, and the number is expected to remain virtually flat over the following five years and fall even further in the future (figure 1). 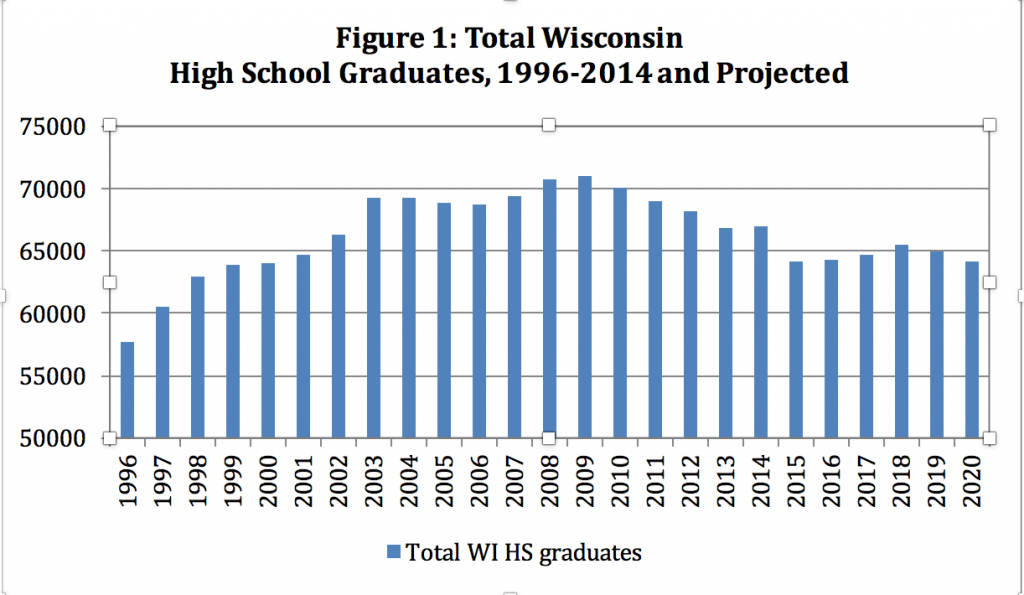 At the same time, the number of working-age citizens is declining, a problem that will only worsen as the number of high school graduates declines (figure 2). Many businesses indicate they are challenged to find workers. A ready supply of skilled and able workers is often central to company location decisions.

In short, the state of Wisconsin needs to retain and attract as many young workers into the state as possible. 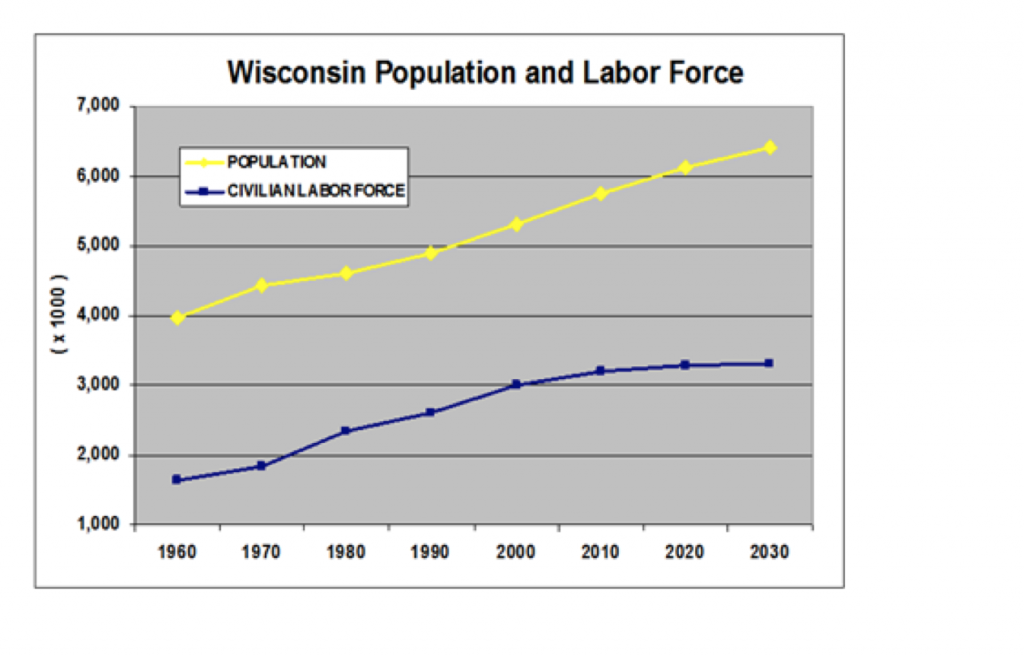 UW-Madison is uniquely positioned to help on two fronts. First, as the highest ranked school in the state, we have the best chance to keep the very top high school students in the state for college. Many of our admittees, if they don’t come here, go to out-of-state schools. That greatly increases the likelihood they will accept jobs out of state and not return to Wisconsin. Our admissions office has stepped up its efforts to reach out to top Wisconsin students from across the state. This includes contacting high-performing students earlier (before their senior year), creating a new campus-wide “Experience Wisconsin” event with an expected attendance of over 1,000 prospective students and their family members, bringing top admitted Wisconsin students to special events like the Chancellor’s Reception, and partnering with alumni volunteers to identify and court prospective Wisconsin students.

Our second responsibility is equally important. As one of the top-ranked schools in the nation, we attract highly skilled young people from around the world to Wisconsin. This is an opportunity for the state to retain these individuals after they graduate.

It’s not a surprise that Wisconsin residents are more likely to stay in the state following graduation. Among our Wisconsin students, 72 percent are in the state in the year following graduation. Among non-resident students, 15 percent stayed in Wisconsin in the year following graduation in 2014. We’re partnering with UW System to do all we can to raise those numbers. That means collaborating with Wisconsin-based businesses and industry groups like Wisconsin Manufacturers and Commerce or the Wisconsin Technology Council. We need more Wisconsin businesses engaged at UW-Madison, sponsoring events, offering internships, and getting known by students before job interviews in their senior year. If students know Wisconsin companies, they are more likely to be interested in interviewing with them and working for them.

Given today’s demographics, the 27.5 percent enrollment limit for non-residents no longer makes sense at UW-Madison, particularly as the number of high school graduates in Wisconsin declines. UW-Madison is highly competitive nationally and internationally for undergraduates, but is one of the few schools in the Big Ten that has a policy that limits nonresident enrollment. Removing this limit will allow UW-Madison to compete on a level playing field with peer universities nationally.

Should the board approve our recommendation, there would not be a drastic change in our enrollment profile. We estimate that with our current classroom and housing capacity we can accommodate a few hundred more non-resident students per year.

The request to the Board of Regents is to waive this enrollment limit for four years. We’ll need to report regularly on what we’re doing. Critics have charged that we are doing this only for budgetary reasons. It is true that there are budget advantages to this proposal, which can’t be overlooked in the current higher education climate. But the demographics in Wisconsin clearly show that this is a policy change that we should be making in any case regardless of the budget situation.

By shifting from a percentage to a numerical enrollment requirement for Wisconsin residents, we will be able to focus on recruiting talented Wisconsin students and encouraging their enrollment, while also allowing Wisconsin businesses to benefit from our strong out-of-state applicant pool.