About 400 people gathered at Union South on Feb. 24 for “Moving Forward: Conversations on Racial and Ethnic Diversity.” Many were undergraduates, but there were also a good number of graduate students, faculty and staff in the room. I was pleased to see the mix of racial and ethnic backgrounds, as well as ages and roles across the university. 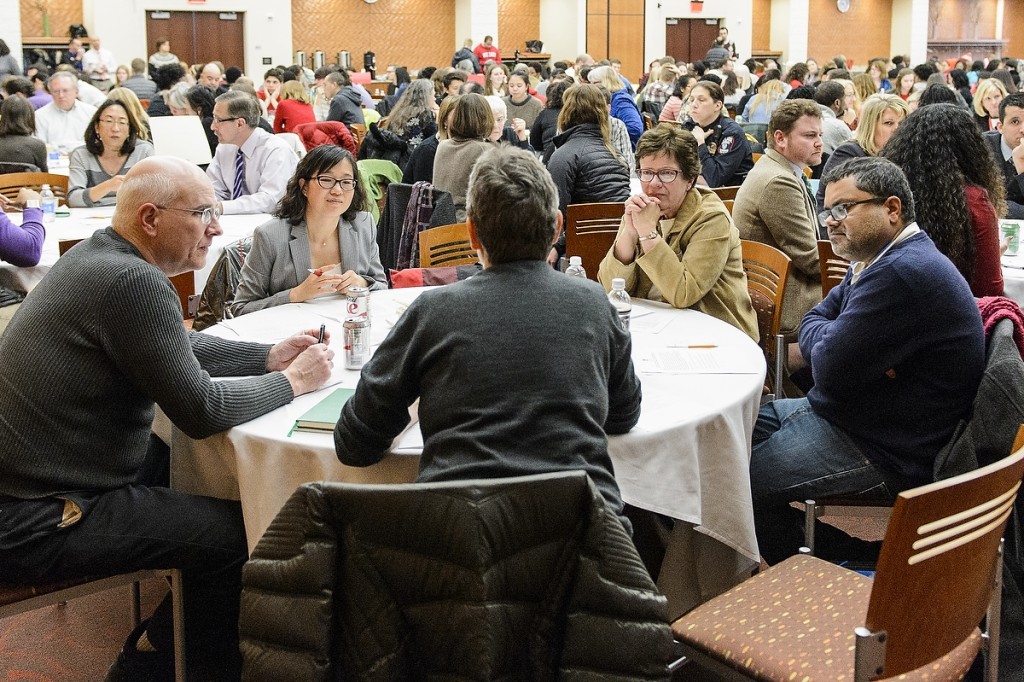 There was an enormous amount of energy in the room, and it is clear that this topic is on many people’s minds. The primary purpose was to update people on what we’ve done but also to solicit their comments on what we need to do next, particularly around the issue of racial diversity at UW-Madison.

I want to share a few things I observed that afternoon:

While there is a lot of valid criticism about what we haven’t yet accomplished at UW-Madison, there were also many in that room who have been working hard on these issues and crafting our Diversity Framework.

Despite the many challenges we face, we’ve made progress in some important areas, such as closing the gap between targeted minority students and other students in retention rates and shrinking it substantially in graduation rates. But saying that doesn’t mean we should feel satisfied. We are still far from where we need to be, and we need to stay focused on moving these issues forward.

I deeply appreciate the willingness of our students to engage in conversations about these issues and the policies that UW-Madison should pursue. It’s important for all of us to be at the table and talking together. There may be some differences of opinion in how we move forward, but we are committed to this work.

I’ve occasionally heard folks say, “Well, UW just doesn’t care.” If we didn’t care, we wouldn’t be spending the time, money and energy that we’ve spent for many years. Have we accomplished everything we hoped for? No. Can we work together affirming our shared values of diversity and inclusion? Yes, and I appreciate the respect and shared commitment that I heard in that room to work together.

I also note there’s a sense of impatience from some of those present, particularly impatience about the slow rate of change at UW. I understand that impatience. I’m not happy that we’re still engaging in some of the same conversations that I’ve engaged in at multiple institutions over the past 30 years.

I would love to be in a post-racial society where these issues are no longer in front of us. But we aren’t there yet. We aren’t even close. Social and economic change comes slowly. As an institutional leader, I will often have to share contexts as to why things can’t happen quite as fast as others might wish them to happen. I appreciate that sense of urgency and the energy of those who want to push faster.

Finally, I have to say that I remain most unhappy about the stories I sometimes hear from students of color, stories of fellow students who say hurtful things and particularly of intoxicated students who yell out racial slurs to those who walk by. I’ve heard similar stories from women students who have to put up with crude sexual comments just walking down a public sidewalk after dark, often from intoxicated fellow students. Or incidents of public abuse received by students of color, our Jewish students, or our LGBT students.

We aspire to be better than that. We want a campus environment where all can engage, create, discover and thrive. I will continue to call for everyone in our community to act with civility and respect.

Addressing these sort of cultural and behavior issues isn’t something that can happen without everybody’s involvement. When you hear something, say something, even if it isn’t directed at you. Let those who are the targets know that others in the community are with them.  It should not be up to women alone to stand up to crude comments; men have to join them. It should not be up to our students of color to stand up against hateful slurs; our white students have to join them.

And please use our reporting process, at go.wisc.edu/reporthateandbias, so we can track these incidents and respond as an institution where possible.

Above all, I’m pleased that we’re having an open conversation about race, diversity and climate with everyone on our campus invited to participate. I look forward to continuing this conversation in the months to come.